Are you ready for a film acting career? 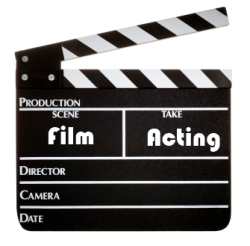 If most of your experience is in theater acting, you may find working in front of the camera
a little awkward. Don’t worry, it’s much easier for a theatre actor to switch to
screen acting than it is for film and television actors to do theatre. Here are a few movie acting tips to get you started.

Film acting Tip 1 – Everything is Smaller

When you act on stage, you need strong vocal production to be heard by the audience and large gestures to communicate what is going on to people who are sitting too far away to see small facial expressions. When you act for the camera, it’s almost the opposite. You work with very sensitive mics that can pick up every word you say if you just speak normally and the camera shows every nuance of your facial expressions. Actually, in a close-up, everything is magnified, so a normal unexaggerated facial expression can appear “too big”. Similarly, gesturing can quickly become very distracting.

How do you fix it?

Keep it small. Remember that everything you think or feel will show in your eyes. You don’t need to do anything else to communicate the words. If you just think the words, the audience is so close that they will know what you’re thinking and feel with you.

Rent a few movies and watch your favorite film actors. See how little they do and how immobile they can be. Practice stillness when you go over a script, only moving and making a gesture if you feel a real impulse to do so.

Film acting Tip 2 – Everything is Repeated

Once the curtain rises on stage, that’s it! The show goes on no matter what. You only get one go at each line. You have your stage blocking, but every night is different. Let’s say your character has a scene while eating grapes. One night you’ll eat a grape before one line. Another night, you eat that grape after another line or in the middle of it.

Film acting doesn’t really work this way. Every scene is broken down into different camera angles, and every angle is broken down into takes. Unless you’re doing an ultra-low budget film or Clint Eastwood movie, chances are you’ll have dozens of takes of the same lines.

On the one hand, this is a good thing. It allows you to try different things and make mistakes. On the other hand, you have to remember that all these takes will eventually be cut together into one scene, which means your actions must match from one take to the other. If you eat a grape at the end of one line, you need to eat a grape at the end of that same line for every take. Otherwise, when the editor is ready to cut your 2-shot to a close-up, it won’t match. Not only that, you need to pick up and eat the grape at relatively the same speed and angle each time! I know, that can turn out to be a lot of grapes, but just think of those early Hollywood actors who were smoking cigarettes…

Film acting Tip 3 – Everything is Awkward

Acting for the camera means you, the actor, have to perform within technical parameters that may seem very unnatural. For example, depending on where the camera is positioned, you may have to cheat eyelines, which means you may not be looking directly at the actor you are supposed to be having the scene with. Actually, if you are doing green screen work or having a scene with a recognizable actor, you may not even have that person present during your reaction shots and closeups.

Another thing that can be disconcerting for a theater actor at first is how much interruptions there are. In between takes, the makeup artist will be in your face fixing their work, while the script supervisor or AD gives you technical adjustments and a movie extra tries to start a conversation. It can take forever between takes, while you’re just standing there waiting. Then all of a sudden, it’s “action!” and you’re expected to be ready.

How do you do that?

Mostly, by being prepared, so you can take in all the technical information
and jump back into the role when your time comes.
That’s where your training in theater comes in handy.
You know relaxation and concentration techniques. You know how to be professional.
That’s why so many casting directors in LA like to hire theatre actors for the screen.
Film acting and theater acting may be different, but in the end, it’s all about talent and training.
If you’re new to acting for the camera, take a few film acting classes and the rest you’ll learn on the set.

Return to Become an Actor